All I Want for Christmas…

Fact: Women are expected to wear sexy, lacy, skimpy underwear while men get away with saggy, stained, tattered skivvies.

Not for long, thanks to the new Tommy John video that highlights the double standard and offers men a way to upgrade their undies. For the past few months, SS+K has been working with this upscale men’s undergarment brand, and now we’re celebrating the holidays with this call to end the tyranny of battered boxers + briefs.

Hallelujah, here it is.

A Launch Spot for FWD.us

We’re proud to announce SS+K’s new spot “Emma” for our client FWD.us, premiering first online to FWD.us volunteers and the FWD.us community. Inspired by Emma Lazarus’ poem “The New Colossus” that greets immigrants at the pedestal of the Statue of Liberty, the spot is the group’s first in support of “sensible immigration reform.” The spot was named a Creativity and AdAge pick of the day.

FWD.us is a nonpartisan advocacy group from Mark Zuckerberg and other Silicon Valley tech leaders invested in enhancing the tech community’s voice in the nation’s public discourse. The organization, launched in April 2013, was named and branded by SS+K.

We’re proud to announce the launch of The Red, a campaign developed in partnership with American Student Assistance (ASA). The cornerstone of The Red is a short psychological thriller directed by the Sundance-award-winning trio of Borderline Films – the team behind critically-acclaimed movies Martha Marcy May Marlene and Simon Killer. See more at Face the Red.

The Red tackles the crushing anxiety that often accompanies student debt, and shows viewers the path to relief via SALT, a free online debt-management resource created by ASA. The campaign was created help young people confront their student debt and inspire them to take meaningful action. Both the film and related partnerships with The Onion, Buzzfeed, College Humor, MTVu and Rotten Tomatoes talk to the audience on their terms and use entertaining content as a way into a conversation around a challenging topic.

Adweek called the film “a cross between The Blair Witch Project and Black Swan, with a dash of Lost.” Here’s more on the campaign in the New York Times Bucks blog.

Last week we rolled out a brand new version of our VineViewer project with custom content features and a slick new design.  And we partnered with our friends at VW to bring the experience of the New York International Auto Show to automotive enthusiasts around the web, as told through vine videos.  Check it out.

The Vine community is flourishing, and its power as a storytelling + marketing tool continues to grow.  We’re really excited about the possibilities (so is AdWeek, who recently featured our NYIAS VineViewer). We can’t wait to see what’s vine’d next.

SS+K introduces SX6s, a new way to watch, engage and participate with SXSW 2013. A collaboration with developers Firefall Pro, Sx6S allows users to watch SXSW as it happens across Twitter’s Vine app. SX6s has been featured across advertising, creative and technology media, including PSFK, AgencySpy and Creativity. During SXSW Interactive, SS+K compiled a best-of from SX6s for the best 6-second snippets of the festival. Check it out below.

AdRants: Why SXSW is still awesome

“SS+K wanted to capture the SXSW experience by tapping into the videos people were sharing from the festival through Vine. The agency used the SX6s app they built to view and select a set of Vines they thought were an accurate representation of SXSW experiences people were documenting in their vines: parties, food, street life, robots, and the Music, Film, and Interactive conference itself…The result is a frenetic video that captures what it’s like to attend SXSW. The pace is fast and furious. The schedule is tight. And it’s a panoply of information and insight to fuel the mind for months following the event.”

Vine is definitely one of the most fun and popular new apps in a while, and its widespread use at SXSW is proof of that. This site pulls together hundreds of the little 6-second videos into one place, so you’ll always know what’s happening everywhere in Austin. It’s really fun to see the range of activities people are engaged in – everything from hushed panel audiences to wild concerts and puppets being interviewed.

In cased you missed the unveiling of SS+K’s Vine SXSWi search tool dubbed “SX6S,” the agency has rolled out the highlight reel above to give you a feel of the goings-on in Austin this past week. Thankfully, our sort-of ADD makes clips like this quite palatable. Here’s some context from SS+K head of production, John Swartz: “We brought these vines together and edited as you might any montage, or even a music video. But as we did, we realized that the range of vines gave us incredible flexibility in telling the story of the festival. And rather than just play back the videos in sequence, we thought presenting them in a more visually engaging, even frenetic way, gave a better sense of the mania of the festival. We thought each video was special in its own way, depicting something fun, funny, ugly, embarrassing, interesting, etc. We each had a favorite, and no one vine stood out as the best. Although I’m partial to the monkey.”

“Because every social utility at SXSW has to be more complicated than the last, SS+K launch a follow-up to their pretty cool “Vineviewer” tool, which let you search for Vines based on hashtags and keywords. SX6S aggregates #sxsw-tagged vines from Twitter, then lets those in Austin check out what everyone else in Austin was up to by searching for things — like #breakfasttacos, for example. If you’re not in Austin, you can look to, but why would you want to know of all the fun you’re missing out on?” 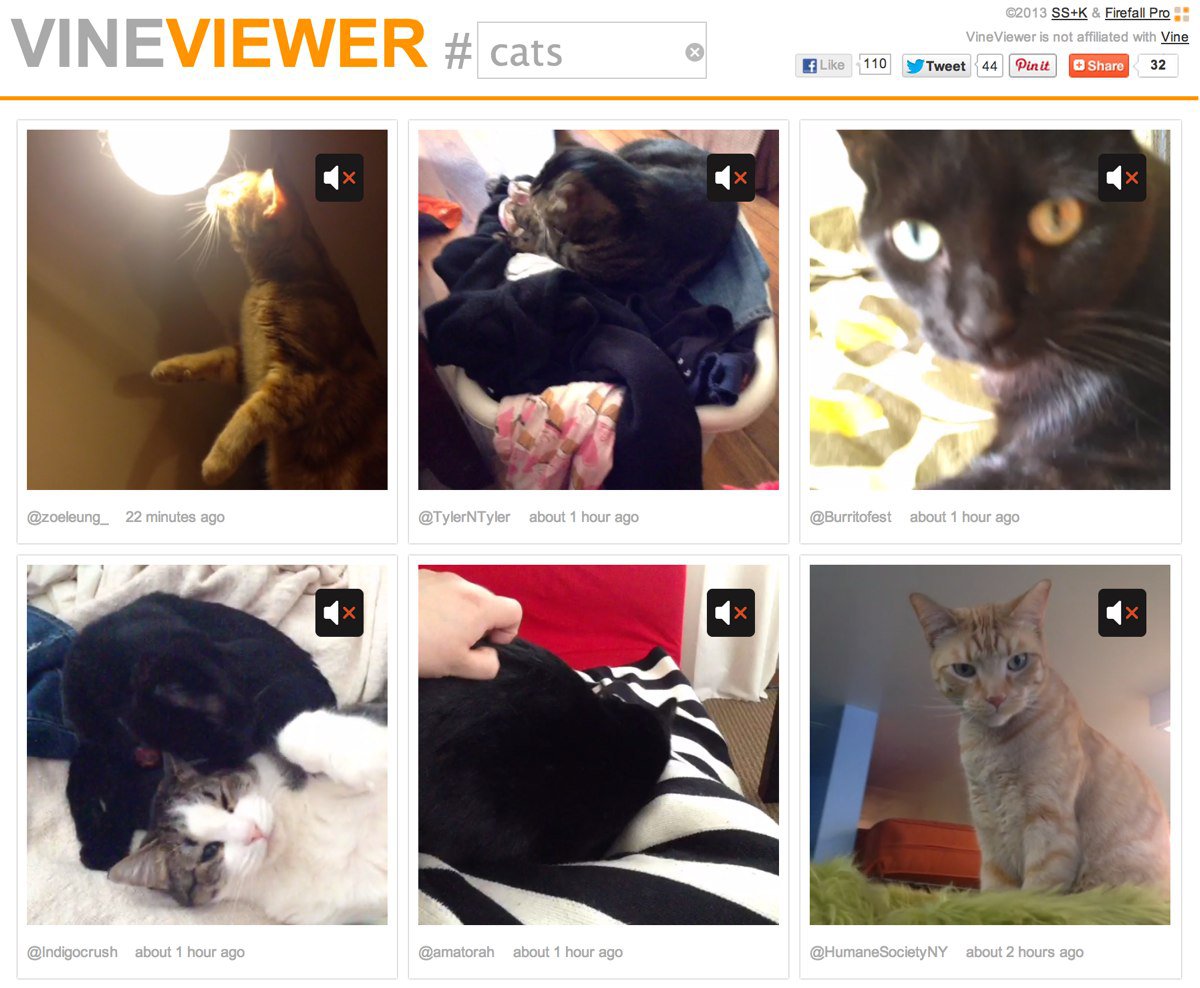 VineViewer is a fun utility developed (rapidly) by SS+K and Firefall Pro designed to allow people to search the growing library of vines based on their tags. We were really excited by the launch of Vine. Like everyone else in our business, we immediately began thinking of different ways we might bring vines in on our client work. In doing so, we lamented that there was no simple way to search for vines of a specific topic, like love for Valentine’s Day. Now you can.

VineViewer has been featured in Fast Company, Creativity Magazine and on AgencySpy, Business Insider and in Creativity’s AdCritic Top 20. 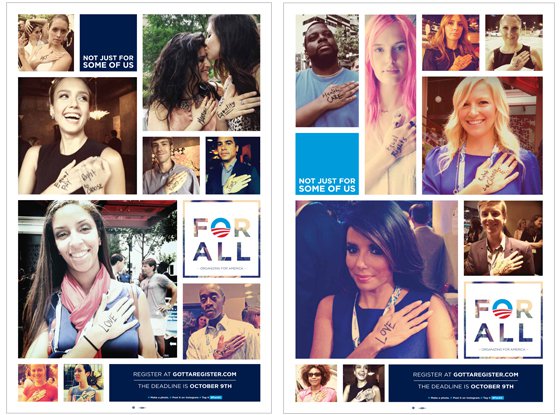 We pride ourselves on producing campaigns that get people talking, thinking, acting. And the Obama/Biden 2012 presidential campaign got people talking, thinking, and acting like no other effort in modern American politics. Thousands of campaign staff, hundreds of organizations, and many other agencies worked on advertising and media. We’re incredibly proud to be counted as a small part of the team.

As the campaign’s youth agency, we developed two campaigns to reach young Americans.

The first campaign – “First Time” – aimed to convince college students their first time voting was an important, life-changing decision. Moreover, we emphasized their ‘first time’ should be in support of the President.

We even got Lena Dunham in on the action. Through a video that’s been viewed more than 2.5 million times, Lena sparked a national conversation about the issues that matter most to young people.

The second campaign – “For All” – used the Pledge of Allegiance as its foundation. The campaign underscored both the president’s vision that we’re greater together and the values that connect young people to him. It provided young Americans the opportunity to share their own visions for the future. The idea was simple: write an issue on your hand, take a photo, post it on Instagram and spread the word. You might recognize some of people in the shots below. We think it was the first Instagram-based political advertising campaign and it reached deep into our target. More than 76,000 Twitter users tweeted with the #ForAll hashtag, potentially reaching more than 150 million people between September and election day.

The result? The numbers tell the story. 18% of young Americans turned out in 2008, with 66% voting in support of the President. This time around – even amid concerns about the economy and disenchantment with the political process – they turned out again and in record numbers. Young people made up 19% of the electorate in 2012, an all-time high, and 60% of them voted for President Obama. Analysts have said the youth vote made the difference in VA, OH, FL and PA, key battleground states that put the President over the top. Moreover, the ad was named Time’s #3 ad of the year.

While most people spent the summer thinking about anything but school, we thought about it a lot. Great new clients Kaplan and American Student Assistance kept us in academic gear. And, in June, we launched the College Board’s Don’t Forget Ed campaign to keep education from being forgotten during the election cycle.

We put 857 empty desks underneath the Washington Monument to symbolize how many high school students drop out every hour of every school day.

The installation rocked, and made its way to the front section of the New York Times.

Next, we piled $1.5B in hundred dollar bills on Wall Street across from the New York Stock Exchange to represent what we gain by reducing the high school dropout rate by just one percent:

And it ain’t over yet. Hint: watch the debates

It’s not what you expect to hear from anyone, least of all from the world’s leading pharmaceutical company. And that’s the point of our new effort with Pfizer.

Get Old may not be what we expect to hear, but it’s what we all hope to do: live longer, do more, see more. It’s a call to rethink our assumptions about our futures in light of medical science’s promise combined with our own potential.

Get Old is a unique, provocative platform built on a core human truth – that everyone wants to live the longest, fullest life possible, at any age. This platform encourages dialogue, celebrates experiences and provides a space to share the wisdom and knowledge that come with getting older. Get Old represents a new bottom-up, listening-based approach for Pfizer, an effort to support a very important conversation in channels where people are already conversing.

Developing this with Pfizer has been a fascinating outing for us. It’s news we want to share with our friends, but we also invite you to join in:

We have the privilege of doing a lot of great things for a lot of great clients, but, every now and then, we get the chance to do something that brings together all of what we do best. For us, this has been one of those. 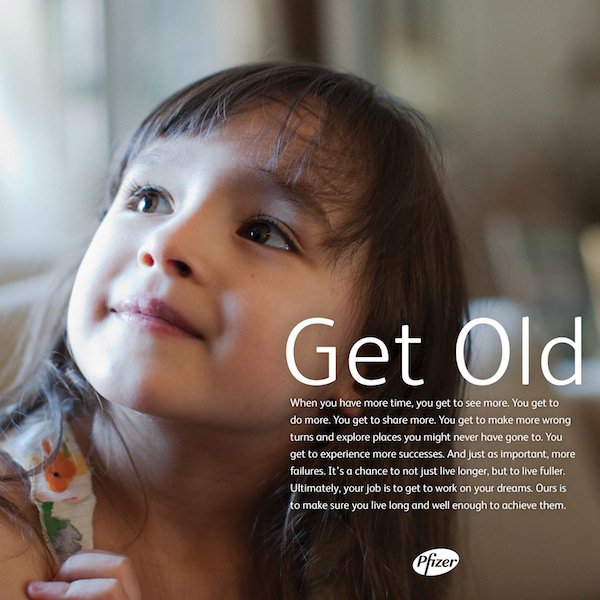