At SS+K we work across many types of brands, but once every four years we get to tap into our political roots and take part in the election, and what an election year this is! When our right to choose what we do with our bodies, who we marry, how we’re seen in the world and so much more is at stake, we had to do something.

It’s 81 days until the 2016 election and a reality TV star whose potential presidency is listed as one of the top 10 risks to our planet might actually win. So we partnered with Dexter and Betaworks to create a digital experience that uses Trump’s biggest weakness – his own words – against him before it’s too late: a Facebook Messenger bot called BFF Trump.

We’ve worked with a number of incredibly smart, millennial-focussed brands around the election and we’ve learned a few things:

With a personality like Trump, it’s hard to navigate the breadth of positions he’s taken on anything from key election issues through to Robert Pattinson, and he’s everywhere – on the news, on buildings, sidewalks and steak packaging – everywhere.

Knowing the youth of this country rely on a skewed filter bubble to inform their political views, we began to ask ourselves, “is Trump, the real Trump [and his opinions on women, immigration, etc.] in the newsfeed of the politically-disengaged?”

We partnered with Betaworks’ bot-building platform Dexter to create BFF Trump, a Facebook Messenger bot which gives users a one-on-one conversation with the biggest mouth in the election year, sharing his views on women, eco issues and love and more.

Unlike so many educational bots on the market, BFF Trump pairs personality with Trump’s real quotes, motivating users to proactively engage, rather than relying on a push notifications to drive the experience.  It’s also filled with hidden easter eggs for users to discover.

Ultimately we hope BFF Trump sheds a light on the realities of Trump himself, and the importance of the election, and above all, urges everyone to get out and vote this November. 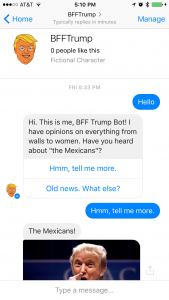 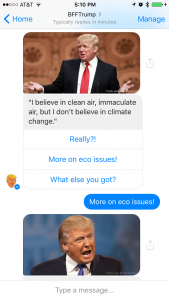